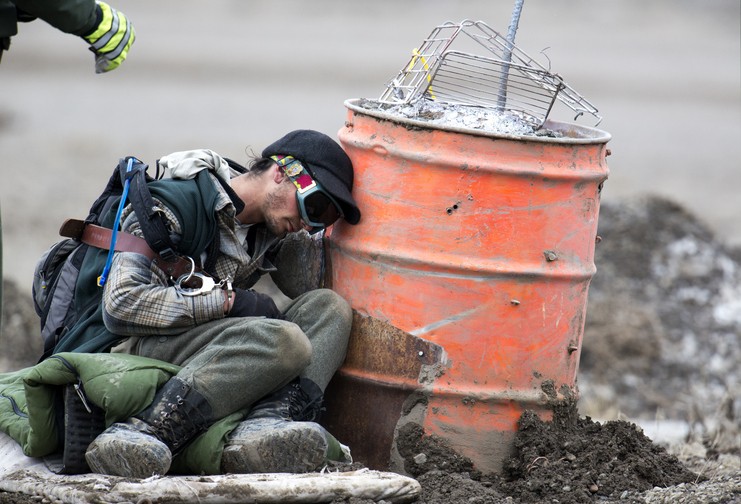 A lot of people ask me about the young man Comfrey, who we saw ride off on a freight train in the American Nomads documentary. He is alive and well, and protesting the slaughter of buffalo in Yellowstone National Park.

Yellowstone National Park officials found 20 year old Comfrey Jacobs chained to a barrel and blocking the road to the Stephens Corrals this morning.

Jacobs, a member of the Buffalo Field Campaign risked being arrested and banned from the park to protest the ongoing slaughter of Yellowstone’s Bison. The Stephens Corrals is where hundreds of bison have been lured with hay and held until they are loaded into trailers and hauled to slaughterhouses. Many of these bison are pregnant females that are just weeks away from giving birth.

Because Jacobs was in a closed area of the park there was no opportunity to speak to him in person, but in a press release statement, he said,

“During my time in Gardiner,” said Jacobs, “I was feeling helpless as I watched wild buffalo lured and trapped, fed hay like livestock, tortured with sorting and testing, and eventually crammed into livestock trailers headed for slaughter facilities, while simultaneously bison were being hunted just outside the Park boundary.”