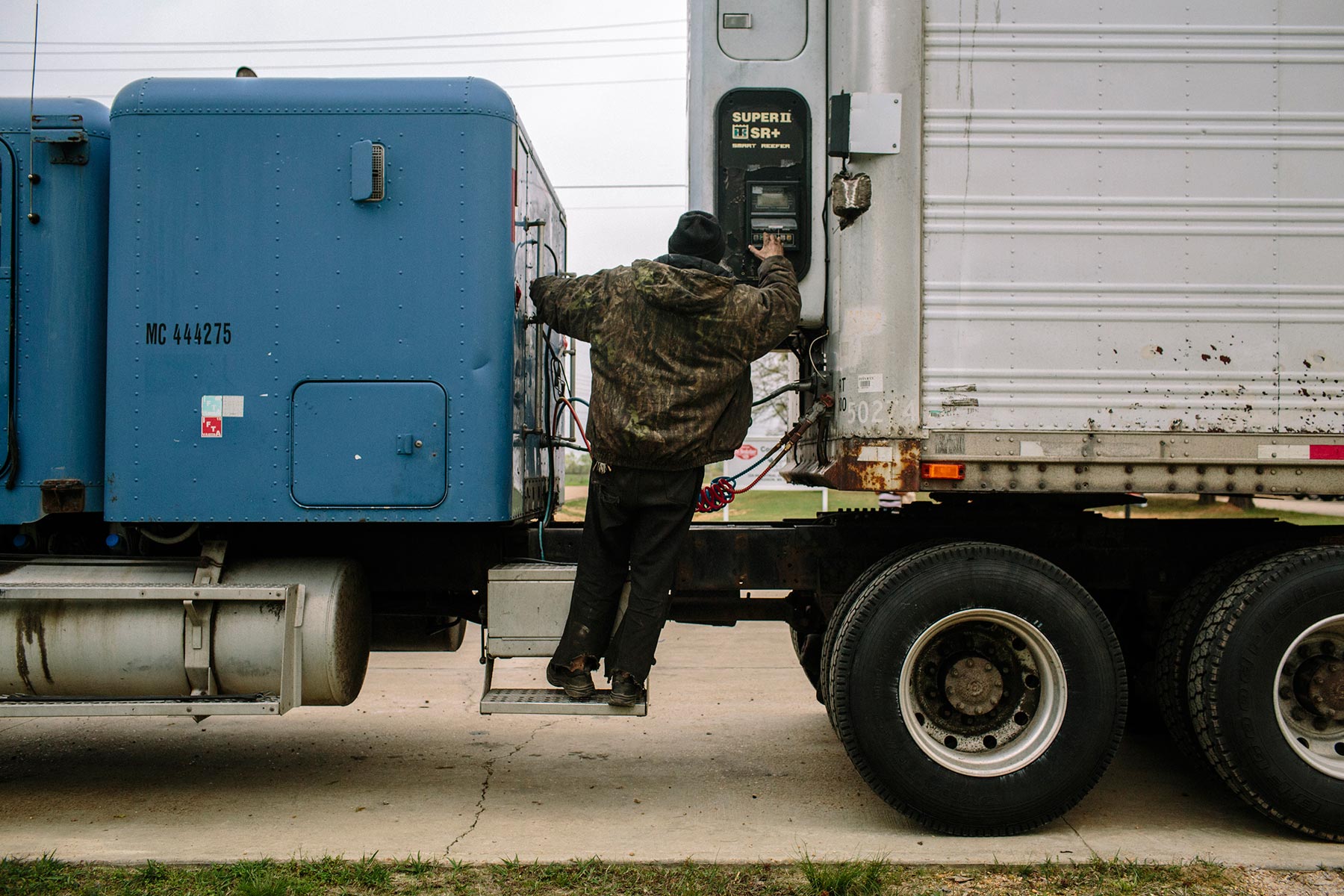 The warehouse workers are in no hurry. It doesn’t cost them a dime to keep a trucker waiting. “It’s going to be tough to deliver this load on time without breaking the hours-of-service regulations,” says Harsell. “I’m safe, I’m reliable, I do a good job, and they want to turn me into an outlaw.”

Harsell is one of 350,000 independent owner-operators hauling freight around the country in his own big rig. The other 90 percent of U.S. truckers — 3 million of them— lease their vehicles and driving services to a company or drive company trucks.

Like many independent truck drivers, Harsell feels like the deck is increasingly stacked against him. Unlike company drivers, independents have to pay for their own diesel, highway tolls, insurance, permits, repairs and maintenance, and these costs have been rising for decades, while the rates for transporting freight have remained relatively low. But nothing aggravates independent truckers more than the hours-of-service regulations imposed by the Federal Motor Carrier Safety Administration, or FMCSA.

“They’re squeezing us out of a living, and in the name of safety they’re making the highways more dangerous,” says Harsell, echoing a widely held view.

The regulations allow truckers to be on duty for 14 consecutive hours, with a mandatory half-hour break. Within those 14 hours, they’re permitted to drive for a maximum of 11. The other three hours allow for loading, unloading and eating. When the 11- or 14-hour limit is reached, they have to stop driving for 10 hours, and spend at least 8 hours in the sleeping berth. There are also limits on hours spent driving per week.

Three and a half hours of his day are gone, wasted, irretrievable.

“Shipper delay is more common than weather or traffic delay, but since there’s no flexibility in your hours of service, you can’t make up the time,” he says. “Basically, you’ve got three options: You can be late, you can speed or you can drive it one way and write it another.”

Truckers are required to show up-to-date logbooks to Department of Transportation inspectors and police officers who ask for them. It’s no secret that truckers sometimes falsify their logbooks to show compliance with the hours-of-service regulations. Harsell outlines a few likely scenarios. If the delivery point is half an hour away, it’s a rare driver who will pull over and rest for 10 hours because his legal time has run out. Similarly, if a driver runs out of hours a few miles from home, there’s a strong temptation to go the extra distance and fudge the timeline in the logbook. Some company truckers, who get paid by the mile, make fictional logbook entries to earn more money, he says.

A driver might also falsify a logbook entry to disguise a breakdown, or a two-hour nap on the edge of a city during rush hour. The main reason why truckers falsify logs, however, is to get freight delivered on time. “You really don’t want to be late,” says Harsell. “They can penalize you or refuse to take delivery. If you’re late too often, the freight brokers stop giving you good loads.”

Todd Spencer, the executive vice president of OOIDA, has criticized the hours-of-service regulations in front of Congress. He serves as an industry adviser to the FMCSA and the National Transportation Safety Board. “What we’re seeing from the government is excessive regulatory zeal without the research data to back it up,” he says. “Now they’re mandating that every truck must have an electronic on-board logging device, or e-log, and that paper logbooks will no longer be accepted.”

Harsell pulls off Interstate 20 for a late breakfast sandwich and coffee to go, then continues driving east toward Alabama. The most direct route to Henrietta, New York, goes through Kentucky, but Harsell has a dispute there over his fuel-tax filing. He sent the paperwork by snail mail because he had trouble logging on to the website. The officials required e-filing, he says, so they ignored his paperwork and suspended his operating license. Now they want him to put up a $1,000 bond to reinstate it. “We’ll go around Kentucky,” he says. “To hell with those people.”

Ever since high school in New Jersey 50 years ago, he has had trouble with authority and resented its power over him. Fighting it doesn’t work, so instead he’s tried to avoid it and live on his own terms. He has been a commercial fisherman, a shrimper, an environmental activist and a drifter. Once he walked from New Jersey to the Florida Keys with no money, eating snakes and pigeons that he killed with a slingshot. 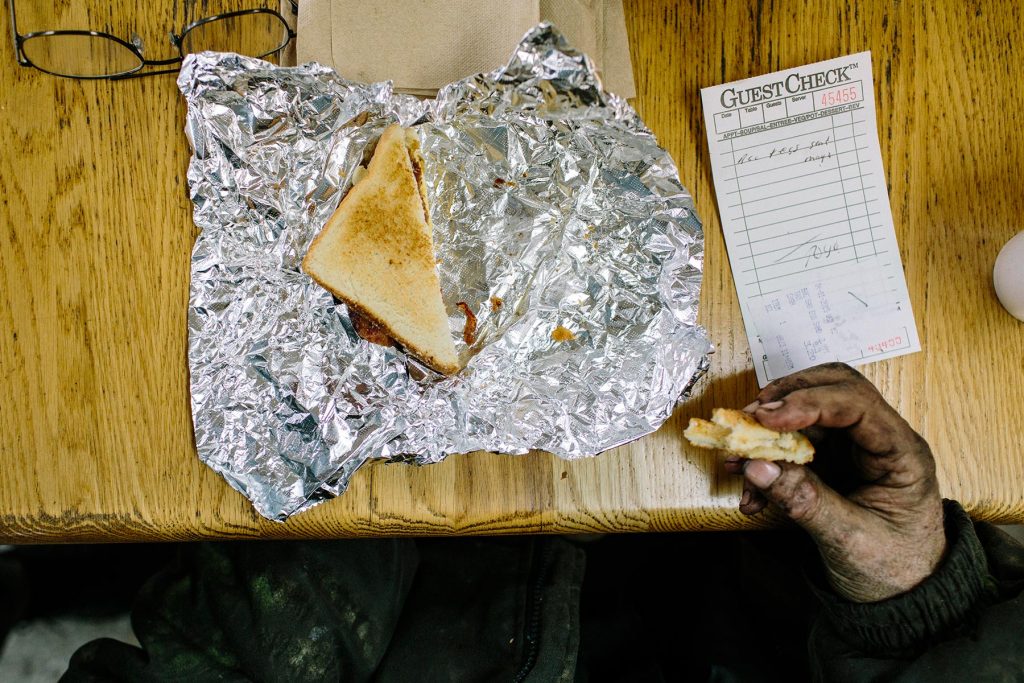 Kewanee, MS – 4/1/2015 – Robert Harsell sits for a quick lunch at a small rural truck stop on the border of Mississippi and Alabama.
Robert Harsell (68) is part of a dwindling population of independent owner/operators in an economy that is steadily becoming more corporate. He feels that new safety regulations threaten their livelihood, and actually make highways more dangerous.

He started driving commercial trucks three decades ago, and since 2003 he’s been an independent owner-operator, a one-man trucking company hauling freight around the country. “I don’t have a boss, I pick my own loads, I go where I want to go,” he says. “I’ve got some land in Virginia with a trailer on it, but I’m hardly ever there. USA is my neighborhood, and I love that highway running under my tires. It gets to where I crave it.”

Harsell used to have a CB radio, but he got tired of arguing with other truckers and listening to fights break out. He doesn’t listen to music or the radio. “When I’m driving, I’m not bored. I’m paying attention to everything around me,” he says. The afternoon sun is lighting up the mountains near the Tennessee border. He’s got a nice, light, well-paying load in the back, and traffic is flowing well on the interstate, aka “The Slab” or “The Big Road.”

For two days of hard trucking, he will make $3,200, which sounds great until you deduct $900 for fuel and consider all the time and money he has spent recently on repairs and maintenance. He had to replace 10 worn-out tires ($4,200) and a badly rusted cross-tube ($800). He put four new air bags ($560) into his suspension. He rebuilt the exhaust system ($200). He fixed various broken lights and housings and some other odds and ends. It took him a week, working in a cold rainy field in the mountains of Virginia. “I do all my own mechanical work,” he says. “Wrenches are the only reason I’m able to stay in business.”

Harsell’s one-man, two-truck transportation company is barely surviving. At the height of the financial bubble in 2005, he borrowed thousands of dollars on his credit cards to rebuild both his trucks and take some time off from driving while he did the work. Then came the crunch and the big recession. The banks cut off his credit and jacked up his interest rates. Fewer goods moved around America, and competition between desperate trucking companies drove down freight rates. When he could find a load, it paid barely enough to eat.

Over the last few years, with the economy slowly improving and more freight in circulation, Harsell has been working steadily and slowly clawing his way toward solvency, with frequent mechanical setbacks along the way. He lives extremely frugally, with one exception.

“Blackie’s my pal, and she eats good,” he says. “She gets fried chicken, rotisserie chicken, raw ham hocks, pigs’ feet, sardines, mackerel, pizza, Dinty Moore stew and ice cream. I might take a bite or two, but the rest is for her. Blackie don’t eat no dog food.” 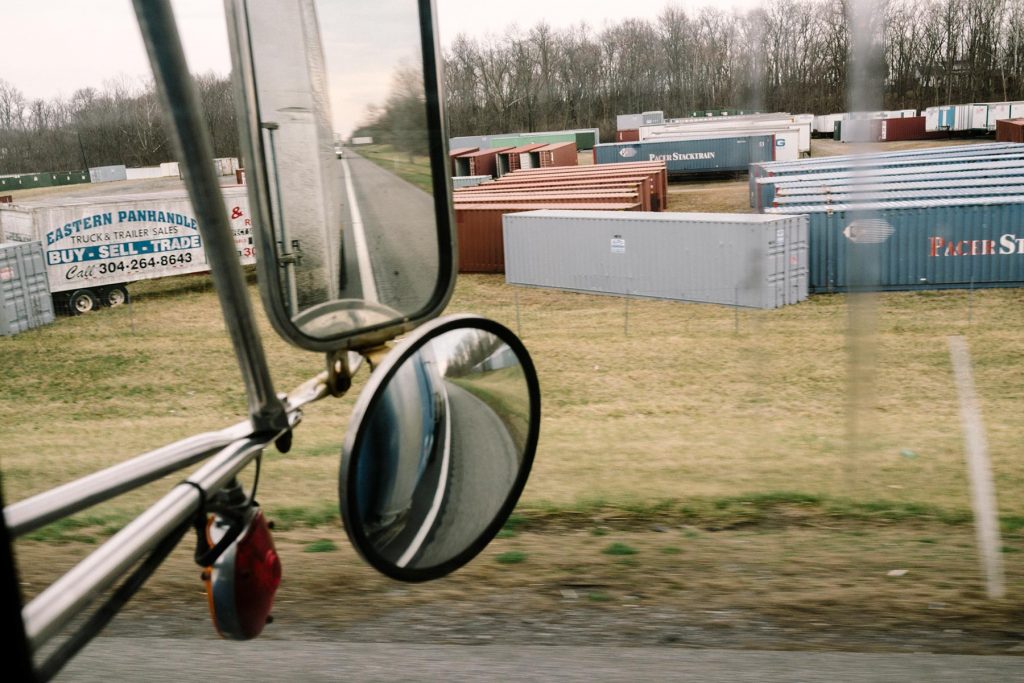 Virginia – 4/2/2015 – A storage lot for semi trailers along Interstate 81 is seen through the side window of Robert Harsell’s 1989 Freightline semi tractor rolls down Interstate 81 in rural Virginia.
Harsell (68) is part of a dwindling population of independent owner/operators in an economy that is steadily becoming more corporate. He feels that new safety regulations threaten their livelihood, and actually make highways more dangerous.

The hours-of-service regulations require Harsell to take a half-hour break. “It’s more of a chore than anything,” he says. “I’m feeling good, but Blackie needs a bathroom break.” (Harsell, like most male truckers, pees into a plastic container while he’s driving). He stops at a gas station, puts $300 of diesel in his tanks, eats some canned sardines. Barefoot, he leads Blackie to a patch of weeds on an old piece of rope. Standing there with his big white beard, strong intelligent face and grimy torn clothes, he looks like a present-day King Lear.

Truck-driving is a notoriously unhealthy profession, but he’s in good shape for a man nearing 70 and he easily passed his recent bi-annual physical. He lives on canned fish, fresh fruit, whole milk and bacon-and-egg sandwiches, and he runs for short distances in truck stop and supermarket parking lots. On a time-crunch load like this one, he forgoes his running, and takes his sandwiches to go.
He never wastes money on a motel room. Very few truckers do. But even at home in Virginia, he sleeps in the bunk of his truck every night, on an unpadded sheet of plywood. “It’s good for the back,” he says.

Read the rest at http://projects.aljazeera.com/2015/06/longhaul-trucking/