Italy’s fascinating Festival of the Snake-Catchers 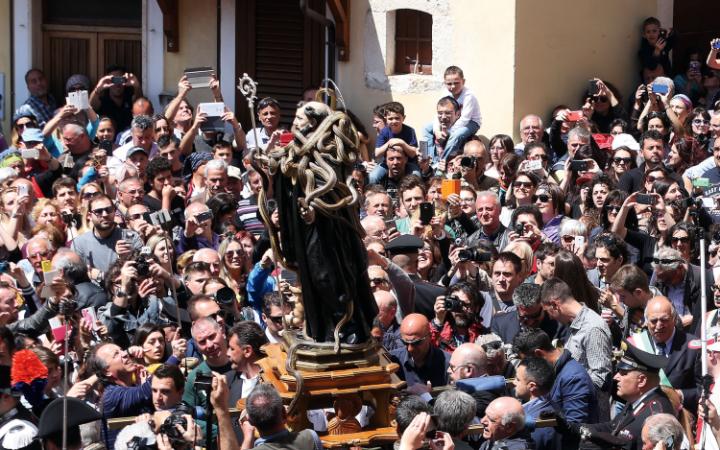 The snake-catchers of Cocullo were drinking espresso in the village’s only cafe. Photographs on the walls showed famoussnakes and snake-catchers from the past, and a few live serpents lay coiled in pillowcases on the floor. It had been a difficult year, the men said. Spring came late to the mountains, and the snakes were slow to emerge from hibernation. Only in the last few days had the catching gone well.

Tomorrow they will drape all the snakes they can muster on a statue of San Domenico di Sora – St Dominic – the patron saint of this hilltop village in the Abruzzo region of southern Italy. Then they will march the statue through the streets, as brass bands play and young women parade with snake-shaped pastries on their heads. It is possibly the oldest festival in Europe, and certainly one of the strangest.

‘If we have too few snakes, it will be taken as a bad omen,’ said Mario Mascioli, a short, sturdy, dignified man with a large grey moustache. ‘But I’m not too concerned. My son is out catching snakes right now. Yesterday he caught a beautiful cervone. Others will bring in more this afternoon.’  The men were speaking the local dialect of these isolated mountains, which still harbour a few wolves and brown bears.